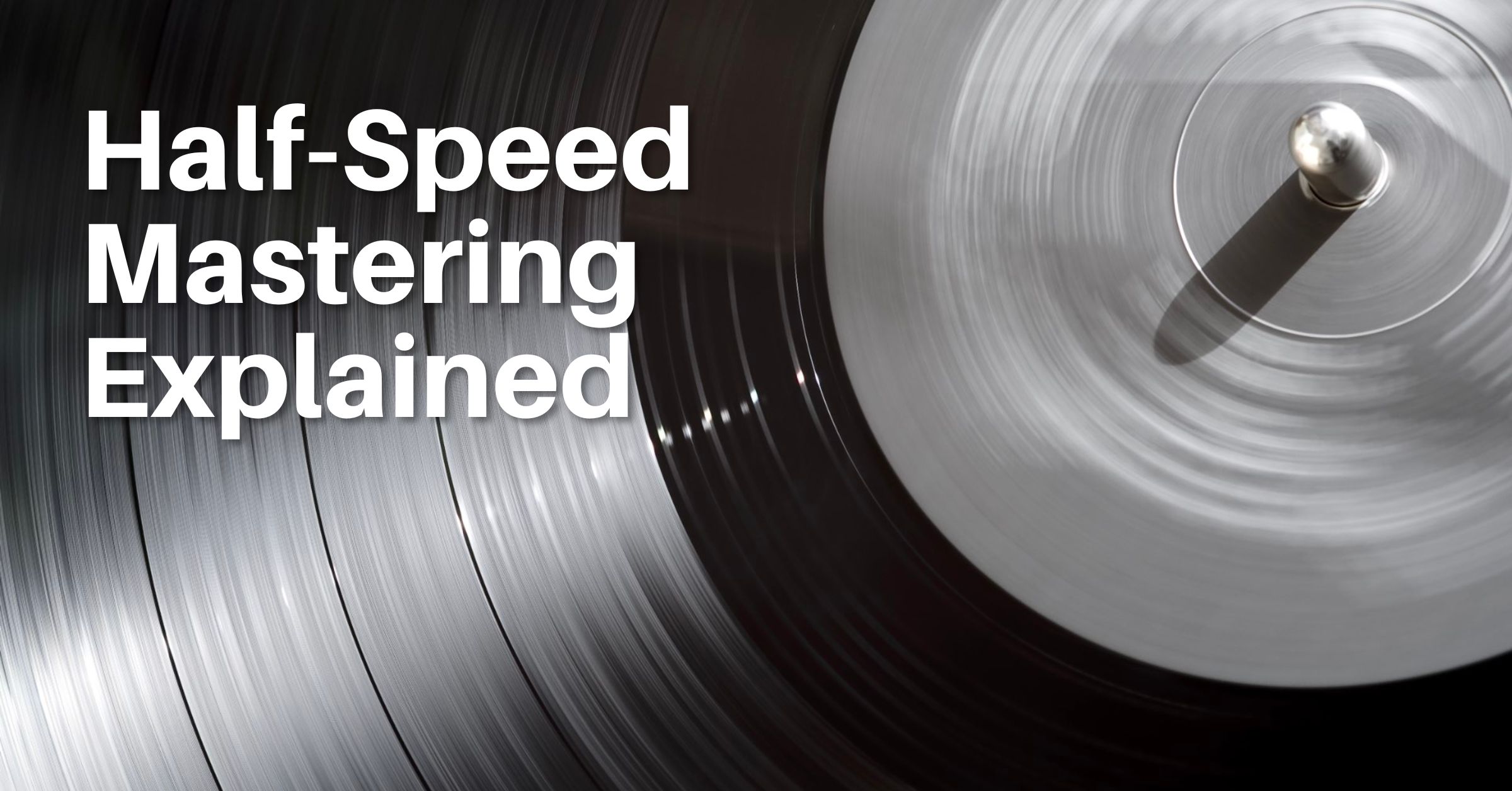 The final product of the record-making process requires much more skill and effort than you might think. Every step of the process requires a detailed level of precision as it’s needed to ensure the music and record perform how they should. In this article, I’m going to explore half-speed mastering, what it is, and why it’s better than many other methods.

The Process of Creating Vinyl Records

There isn’t only one method to creating a vinyl record; it entails more than just pressing grooves into vinyl. Nowadays, many vinyl records start with either a master tape or a high-resolution digital file that contains the music. From there, the mastering lathe cutter head cuts the grooves into lacquer, and then a metal stamper will be made using the lacquer’s design.

This may seem quite efficient, but it can actually be a time-consuming process, and it may not provide the highest fidelity audio possible.

Another route you can take to increase the audio quality is by using the half-speed mastering method. Most of the process is pretty much the same, but it comes with some minor differences that can easily improve the overall fidelity of the vinyl’s sound quality. There are other factors that come into play as well, such as RPMs and a specific Hz if the original audio is coming from a digital source.

What is Half-Speed Mastering?

Half-speed masters come with one major difference, which is that the cutting lathe and audio signal source are operating at half the speed. To give some clarification, instead of 33 ⅓ RPM, the lacquer is being created at 16 ⅔ RPM. It may sound strange as that immediately makes you think it could negatively affect the sound quality of the audio, but there are a few more steps to half-speed mastered vinyl.

The main benefit of this process is that the grooves of the lacquer are created at a much slower pace, allowing for a more detailed and high-fidelity vinyl record by the end of it.

Considering the technical nature of half-speed masters, this particular job is usually only done at a handful of studios across the nation, one of which being the famed and well-known Abbey Road Studios.

Other aspects of the original source file for the music come into play, as it requires some adjustments depending on the quality of the original audio. Regardless of whether they start with a master tape or digital file, many experts in this field will start with a digital file so they can equalize the music by leaving out compression and limiting to improve dynamics overall.

The Differences in Vinyl Audio Output

If you’ve ever spent any time around vinyl records, you’ll notice that their output sounds different in a few ways. The entire frequency spectrum isn’t as punchy, and although you should be able to hear some low-end, much of the focus is on the mid to high-frequency range.

When it comes to digital files, each frequency sounds quite heavy and prominent, and in many modern records, the lower frequencies get a lot of the spotlight. This is another benefit of creating vinyl at half-speed; it gives listeners a better chance of hearing the perfect mix of the song’s frequencies without one overpowering another.

Audiophiles generally know what to expect from the low-end with vinyl records, but considering how much weaker it can sound, this is one complaint about half-speed vinyl mastering from audiophiles and casual listeners.

It’s possible to get a cleaner signal across all frequencies, but this requires special equipment that helps to achieve the best equalization possible.

Although some audiophiles may complain about the lack of bass with some records, there’s an equal disdain for piercing high frequencies. It’s crucial that proper equalization is exercised. Otherwise, listeners won’t have the most enjoyable experience.

With some poorly made vinyl records, high frequencies can actually be damaging to the ear, and this is something that no audiophile ever wants to encounter. Considering half-speed cutting requires an immense amount of precision, it begs the question; is it actually the best way to create the lacquer and final product?

So, Is Half-Speed Mastering Better?

In many aspects, half-speed mastering can most definitely be better, but it also requires the original audio files to be recorded and mixed properly. If the original file doesn’t sound very good, you can expect the vinyl to reflect this poor quality.

Thankfully, many of the experts that have the equipment and know-how for half-speed mastering can do their best to equalize source files, but the benefits from this only go so far.

Overall, half-speed cuts generally deliver much more vibrant dynamics and instrument separation for a more full-fledged listening experience. This isn’t to say that the normal mastering process can’t produce a satisfactory sound; it’s just that half-speed releases come with some additional benefits that can’t be achieved otherwise. Even if half-speed is a preferred method by experts and audiophiles alike, it also has a few downsides that you should know about.

Are There Downsides to Half-Speed Masters?

There are a few aspects of a half-speed master that may not resonate with some listeners, one of which is the higher cost of half-speed mastered records. With how much additional time and effort this whole process requires, you can expect a more expensive vinyl record when everything is said and done.

You can also expect to lose about an octave of music information in the process, and this can lead to an accentuation or dilution of certain frequencies. Casual listeners may not be able to pick up on this, but any audiophile surely will. Moreover, some aspects of the vocals and mid-range in the recording will come out with more resonance, which makes some sounds seem sharper or flatter than others.

It’s evident that the mastering process comes with quite a few benefits to the sound quality, but it isn’t always necessary. Depending on the type of music and source file that’s used, the normal mastering process is capable of producing a stellar sound. From another angle, there are many classic albums that could highly benefit from half-speed mastering due to their age, frequency range, and how they’re mixed.

To determine which mastering process is best for a particular album or song, there are a handful of tests that can be used to figure it out. As mentioned earlier, some equalization, de-essing, and reduction of compression or limiting may be needed for a half-speed master. You also have to always consider the amount of time that goes into the process, and some types of music simply wouldn’t benefit from the process enough to warrant it.

The process requires not only special equipment but a skilled engineer as well, so all of these factors have to be considered before diving into mastering it. From another angle, the quality of some music isn’t up to par with what half-speed mastering requires, and it would be a waste of time, money, and effort to even try.

The Future of Vinyl Records

Nevertheless, even with the pros and cons associated with half-speed mastering, many people still regard it as the best choice for many different types of music.

The normal mastering process will continue to be widely used, but it may not always be the best choice depending on the audio quality the engineers are working with. Even if vinyl records have been popular for a very long time, they’ve somewhat regained widespread popularity in recent years.

Unfortunately, there aren’t many places that have the actual equipment and skillset required to produce such a product. Maybe the increase in demand will help with this in the future, but in some ways, making vinyl records and all of the intricacies that go along with it could be a lost talent if newer generations don’t take the reigns.

Of course, this is unlikely to go this route, thanks to the overall popularity of vinyl records. Still, with the introduction of CDs and digital audio, there used to be a huge decline in the interest in vinyl records.

With newer generations sparking an interest in the sound quality that vinyl records have to offer, this has also spread interest in how they’re made, especially among true audiophiles. No matter which direction music takes in the future, there’s a special experience that comes from vinyl that you won’t get from any other audio source.

This is why both normal and half-speed mastered records will have a place in the world as time goes forward. It also acts as a timestamp to a particular era, and they have a collectible value that you can take with you for the rest of your life. From their unique and pristine sound quality and the nostalgia they provide, vinyl records and half-speed mastering will continue to deliver an unmatched listening experience.

Lucas is the Senior Reviews Editor at HiFi Hippo covering a range of topics relating to turntables, preamps, speakers, and everything vinyl. With 15+ years of music experience, Lucas uses his unbiased ear to guide readers in the right direction for all their viny land home audio needs.