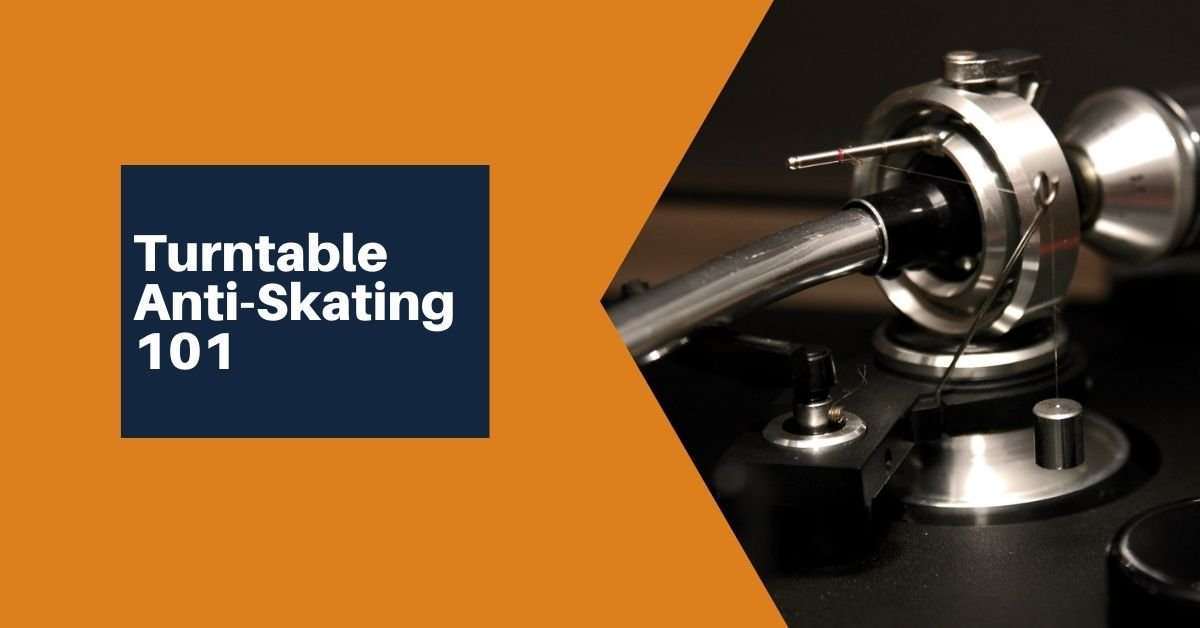 Turntable anti-skate is an important part of the process when setting up your turntable. Whether it’s your first time or you’re an expert in turntable setup, you should know what it is and how it works.

This article will give you a few pointers on how to set the anti-skating parameter correctly, and what it does. You’ll learn why tracking force matters for vinyl records, and how to get the most out of your equipment!

What is turntable anti-skating and what does it do?

Turntable anti-skating is a feature on many turntables that prevents tracking issues when listening to a record. Tracking force and anti-skate problems are usually caused by the stylus being pulled out of the groove and toward the center of the record during playback. Anti-skate stops this from happening by applying a countering force to the tonearm when it is in motion.

Turntable anti-skating is a great feature to have when you’re listening to music on your vinyl setup. It helps reduce wear and tear on the needle, which can prolong its life and prevents playback issues such as skipping or pops in audio during playback. It also prolongs the life of your records by reducing the risk of damaging them with tracking issues. Lastly, it can help reduce distortion and improve sound quality by maintaining an audio balance between the left and right channels.

How to set up turntable anti-skating feature

Now that you know what the anti-skating feature does, it’s time to properly set it up.

The first step is to make sure that you have a properly balanced tonearm. For most turntables, the manufacturer will include an adjustable weight at the end of the arm called a counterweight. The purpose of this is to balance out any extra weight from factors such as cartridge and stylus assembly variations.

To balance out your tonearm, start with the counterweight at 0 grams and anti-skating at 0 as well. Then, adjust your weight until the tonearm floats freely. Your tonearm is now balanced.

To adjust the tracking force, rotate the knob on your counterweight until it reaches your cartridge manufacturer’s recommended weight. If you don’t know this offhand, it’s usually a safe bet to go with 2-3 grams.

Still having trouble, check out this quick and helpful tonearm balancing video here.

Now that your tracking force has been adjusted, the next step is to adjust the anti-skate feature. Most modern systems will include a knob or slider that you can adjust using either an included screwdriver, one of your own screwdrivers, or likely even just with your fingers if it’s manual and not electronic.

Match the adjustable anti-skate knob or slider to whatever tracking force number you’re using with your balanced tonearm. For example, if your tracking force is 2 grams, adjust the knob to 2 as well.

Now that the anti-skate feature is calibrated, check playback sound quality while playing a record for any abnormalities. If you’re still experiencing issues, go back to the previous steps and try again until it sounds good!

What are the effects of incorrect anti-skate settings on a turntable’s performance?

The first is downforce, which keeps your stylus pressed firmly against a record groove during playback. The second is lateral tracking force (LTF), which applies an equal amount of pressure to both sides of the cartridge body in order for it to remain straight as it tracks through the grooves of a record. If these two forces are not balanced, you could damage your records and stylus during playback.

As mentioned above, improperly set anti-skate may also cause audio distortion while you play a record due to improper channel balance associated with a cartridge’s left and right channels.

If you listen to records often, it’s a good idea to routinely calibrate your tonearm and anti-skate to prevent damage and improve sound quality.

Do all turntables have anti-skate?

Rest assured, just because there is no knob there, your record should play find without the needle skating towards the center.

In conclusion, turntable anti-skating is an extremely important component to consider when you are buying a turntable. This little device will help your records stay in place and reduce the force of the needle, which determines how much wear is put on a record’s grooves. As an added bonus, it also helps with sound quality because it eliminates vibrations caused by uneven weight distribution.

If you have any questions about other features or specifications that can be found on these devices, don’t hesitate to ask! We’re here for all your vinyl needs!