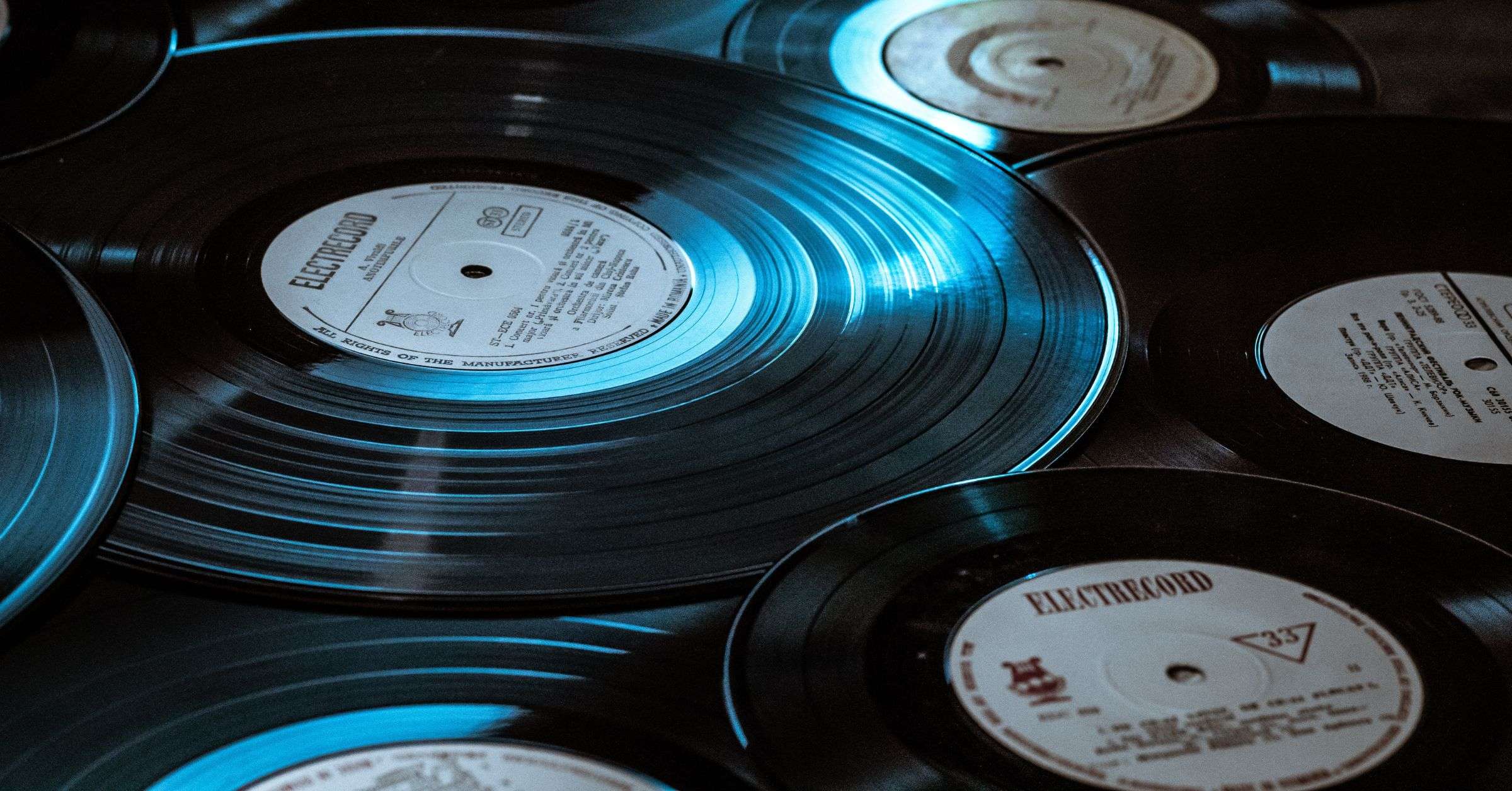 Are you interested in purchasing a new record but don’t know what size to get? Or maybe you’ve been given an old record collection you’d like to listen to? Regardless of your situation, understanding the different types of records and how they are played is extremely important.

This guide covers everything you need to know about record sizes and speeds. Let’s dive in!

Here’s a list of the most common types of vinyl records:

Long-playing vinyl records, or LPs, were first introduced in 1948 by Columbia Records. Long-playing records were used for album releases due to their ability to have more than forty minutes of music. Each side could hold between fifteen and twenty-two minutes of music which was often enough for an entire album.

Most LPs are typically 12-inch vinyl records that spin at 33 ⅓ RPM. However, because 45 RPM LPs have a higher sound quality and reduced distortion than 33 RPM LPs, some LPs are now played at the 45 RPM speed.

7-inch vinyl singles – sometimes called “forty-fives” – play at 45 RPM and typically have one song on each side. These records became popularized by the rock culture of the 50s and 60s due to how convenient and cost-effective it was to simply purchase and listen to a single song.

12-inch singles are also cut at 45 RPM and became popular in the 1970s Disco era. The larger disc meant wider grooves which meant a louder recording level and high-quality music – perfect for clubs.

Twelve-inch records became a hit for dance music and led to the beginning of DJs, or disc jockeys, who played music at dance clubs. DJs preferred the larger format of 12-inch singles, allowing them to easily remix multiple songs.

EP records could hold a run-time shorter than a long-playing vinyl record but longer than vinyl singles. It doesn’t have a standard format like other records.

What does vinyl RPM mean?

Vinyl RPM stands for revolutions per minute, or the number of times a vinyl record makes a full rotation in 60-seconds.

If you happen to visit record stores and notice some numbers like 33, 45, or 78, those numbers indicate. The music won’t sound right if a vinyl record is played too fast or slow.

Now that we understand what RPM means in the context of vinyl let’s get into the different speeds at which vinyl records are commonly played.

33 ⅓ RPM vinyl (usually just called a “thirty-three”) is one of the most common vinyl speeds. These are the standard 12-inch vinyl LPs that you often see in the music aisle or record store.

Columbia Discs began selling 33 ⅓ RPM records in 1948 as devices to listen to whole classical concerts and symphonies without flipping the record. At that point, these records started to affect the commercial market.

Today, most full albums are pressed on 33 RPM vinyl.

Around 1950, the 45 RPM (often called a “forty-five”) vinyl record was released, and its size was smaller than others. 45s are only 7-inches in diameter and made to hold just a couple of songs – usually 2, one on either side.

RCA Victor released the 45 RPM to compete with Columbia’s 33 ⅓. Many radio stations used 45 RPM vinyl records to play artist singles since each side offers one song.

The 78 RPM, or “shellac records,” was widely used before the 33 ⅓ became the new standard in 1948. Before the 33, 78s were limited to only 3-minutes of playback per side. Additionally, they were extremely fragile since they were made with shellac material.

The grooves on these records are significantly larger than those in later records since they were designed to be played on gramophones, necessitating a larger needle to play the music. Because of this, playing 78s on modern turntables can damage your stylus, so be careful!

The 8 ⅓ and 6 ⅔ are rare RPM vinyl records from the sixties to seventies. They have extremely narrow grooves, play super low, and recordings of ninety to hundred eighty minutes could fit on them.

Unfortunately, they never became popular because the recordings are of lower sound quality. It’s for non-musical recording purposes only.

The vinyl record size will dictate the RPM at which they’re played. Here are other ways in which types of vinyl records are cataloged.

This record size is typically 33 ⅓ RPM, which provides fifteen to twenty-two minutes of playtime on each side. It was released for the first time in the 1970s.

The 12-inch record was released for both complete albums and singles. As a result, it gained popularity among club DJs in the 1970s and 1980s, where it was used to create remixes of various music.

The 7-inch vinyl is the smallest record size, but it’s a standard form for vinyl singles.

The recommended speed for the 7-inch vinyl record is 45 RPM with four to six minutes of run time on each side.

Ten-inch records are the rarest since they don’t utilize the space on the record very well. These are typical 78 RPM records and can store one, maybe two, songs on each side.

Many people assumed that 10-inch records were better for grouping together for album releases when it comes to pop music. Still, genres like classical music necessitated longer playback times and, consequently, larger record sizes.

Due to its age, lack of practical use, and rarity, many 10-inch releases are collector’s items sought out by vinyl enthusiasts.

Rare and uncommon types of records

There are a few outliers outside of the standard sizes and speeds of vinyl. Let’s take a look at a few.

It is a vinyl record made with a flexible, thin material. The audio quality is poor and not as great as other regular vinyl records. Magazines often use Flexi disks for giveaways containing popular tracks.

Despite the poor sound quality of some colored vinyl records, some individuals prefer to purchase them because of their attractive appearance and complementary colors rather than choosing the more usual black-colored ones.

Colored vinyl records have been around for a long time, and some people have complained that the sound quality of colored records is inferior to that of conventional records. However, modern colored vinyl sound quality is comparable to standard black vinyl.

It’s a ten-inch disc used for test recordings by music studios. They create music samples using dubplates. Some record companies choose dubplates for their music before formally storing them on a different vinyl record and assuring the sound quality of a piece using dub plate records resulted in its high profit in the market.

Because it is so inexpensive, several recording studios have purchased them. The life of a dubplate record is indefinite if it is handled with care, and it can be played up to five hundred times.

Why do vinyl records have different sizes and speeds?

Stereo records are made in various sizes and speeds since all music recordings are measured and sorted according to their rotational speed (RPM).

Knowing what record you have will prevent you from hearing “off” music, such as music playing slowly or quickly.

When it comes to the varied sizes of vinyl records, a greater diameter signifies a longer extended groove for the music to be played on the record.

The failure to match the rotational requirements of the disk with the rotational needs of your record player may result in the vinyl record becoming warped to the point where it is no longer possible to play it again.

We genuinely hope this article could provide you with good insight into the types of vinyl records and vinyl record speeds.

The vinyl industry is one-of-a-kind, complicated, and incredibly rewarding. We hope this article was helpful for you to understand the different vinyl disc record sizes, speeds, and types.