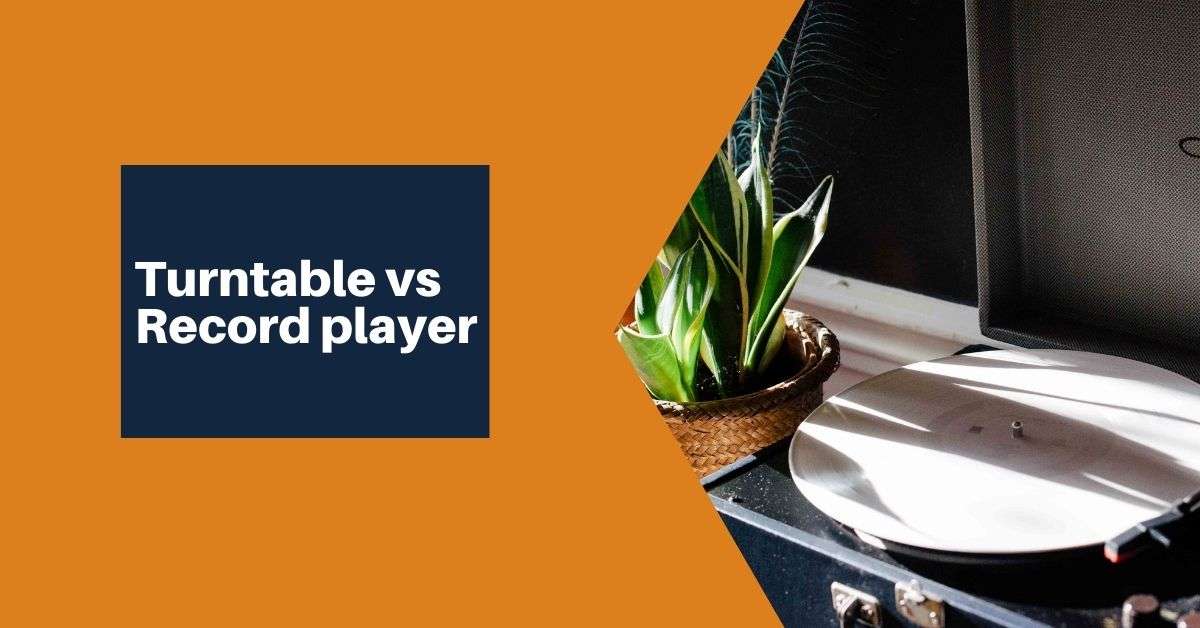 Nothing is simple in the world of vinyl. If you haven’t figured that out by now, you’re about to. Exhibit A: Difference between a turntable vs. record player. You might think the terms can be used interchangeably… they both play vinyl records, right? Wrong.

Is there a difference between a turntable vs. record player?

There’s a drastic difference between a turntable player and a record player. While both do share some similar qualities like having a tonearm and playing vinyl records, the application and use of each player satisfy different sound needs.

What is a turntable used for?

In its simplest form, a turntable is a standalone unit designated with the simple function of spinning a vinyl record at one consistent rate. In addition to this, turntables have a tone arm attached to them with a phono cartridge (also known as the needle or stylus) that rides over the top of the tiny groove carved into the vinyl record and passes that signal across a wire… and that’s where it ends. The only function of a turntable is to spin the record and pick up the electrical signal.

I know you might be thinking that sounds a whole lot like record players. This is where the confusion often lies. A turntable does not have an amplifier and speakers attached to it. It is a singular system designed to simply play records, not amplify them. That’s where phono preamps, stereo receivers, and external speakers come in. For more information on this, read our turntable setup guide.

What are record players used for?

The initial function of a turntable and record player is the same, to spin a vinyl record. Where they differ is they are fully independent systems, meaning they have an amplifier and speakers built-in. When you play a record on a record player, you do not need any additional piece of equipment to hear the sound.

Record players come in various shapes and sizes. You might be familiar with the large record player consoles that were popular 50 years ago. Nowadays, record players are still around, but just in different forms. There are Bluetooth record players, portable record players, and modern entertainment centers with built-in speakers that play records in a single system.

Looking for a new turntable? You’re in the right place.

We know how overwhelming it can be to find the perfect turntable, so we’ve put together a guide to help you out. Whether you want something simple or high-end, there are plenty of options available on any budget. Let’s get started!

Why should you get a record player or turntable?

There are a few pros and cons between record players and turntables. While one person might prefer one or the other, there really is no right or wrong system to purchase. Both have their own unique benefits and drawbacks. Read below as well discuss the pros and cons of a turntable vs record player.

Can you use a record player as a turntable?

The short answer is yes for the reasons described above. A record player usually has an audio output that would allow you to connect a wire to a stereo amplifier or speaker. This is not to say a record player is a good substitute for a turntable. The difference in audio clarity will likely be noticeable, even if the same exact speakers or stereo are used.

How are record players and turntables similar?

We’ve talked so much about the difference between a turntable and a record player, let’s talk about what makes them similar. Firstly, both tackle the prime initial objective of sound reproduction. While yes, a turntable can’t amplify the sound until the signal is converted to line level, if you were to hook it up to a speaker you’d still hear a very faint, quiet sound of the music playing!

Both also have similar components: a needle and stylus that ride on the surface of the vinyl record. The little groove your needle is gliding across is actually an analog sound wave recording!

Lastly, each device is used to enjoy music and that’s something truly amazing! Interested in finding out more about entry-level turntables or more feature-rich audiophile turntables? Check out our 2022 buyers guides!

Buying a Vintage Turntable: What You Need to Know