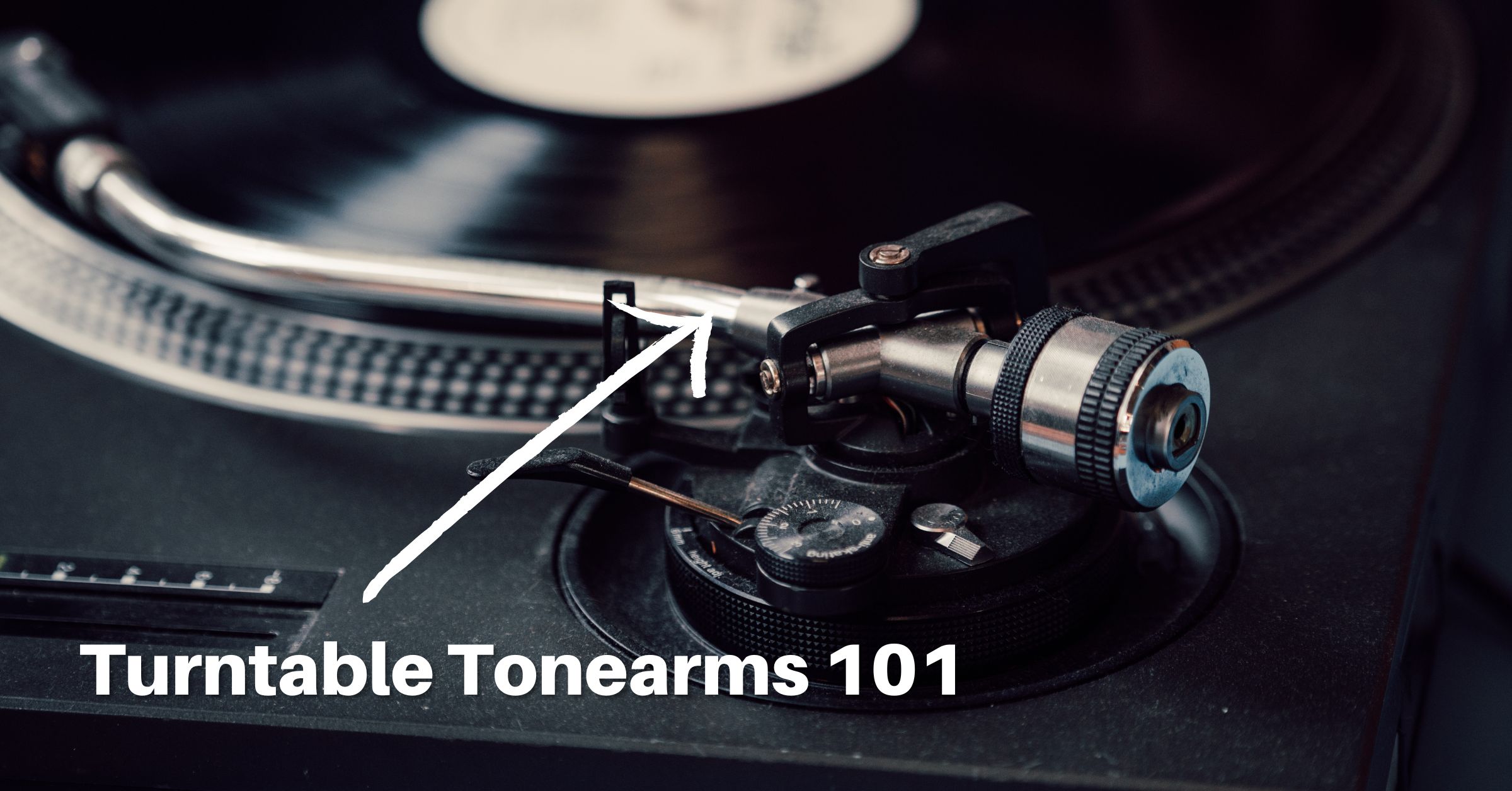 Turntables are complex machines. A series of highly engineered parts work together to precisely read the groove of a record and make music. One of the most important parts of the turntable is the turntable tonearm. Tonearm design can make or break your audio experience. When properly set up, they can turn vinyl playback into a magical experience… when not, well – let’s just say your ears and vinyl records will be asking for mercy.

In this article, we cover everything about tonearms from what they are, why they matter, and what the best designs are.

What is a turntable tonearm?

A turntable tonearm is an arm that houses the phono cartridge on one end and connects to the turntable plinth on the other. The arm extends over the top of a record during playback, allowing the cartridge to ride along the record groove. The vibrations from the record are converted into electrical signals and sent through the tonearm through small wires and then amplified by a phono stage.

Tonearms need to be precisely balanced in order to provide the proper tracking force for the cartridge and headshell. They also need to provide solid electrical contact with phono cartridges in order to retain as much sound quality as possible.

As you can see, the tonearm is a complex system that combines physics and electronics in one unit.

How does a tonearm affect sound quality?

As mentioned above, tonearms a responsible for not only the physical contact of a record but the electrical signals as well. Because of this, the arm design, length, and internals are vital to a turntable’s performance.

For example, a record player does not typically have a refined tonearm design. There’s no way to balance the arm, set tracking force, or adjust the anti-skate. Because of this, record player tonearms cause additional friction on records, which can damage records and cause the music to become distorted.

Tonearms typically come in one of two bearing systems: Gimbal or uni-pivot bearing system. There are other bearing systems, but they are much less common. Odds are, if you have a consumer turntable, you have one of these systems.

In every tonearm, there exists a pivot point. These bearing systems are in place to ensure as little friction as possible makes its way up the arm and to the stylus.

The gimbal bearing is the most common bearing system on turntables because of its easy setup and stellar vibration control. However, gimbal systems will need to be serviced every now and then to ensure they’re in proper working order. If there’s any play with the gimbal, that means that excess vibrations are making their way to the record and causing some level of distortion.

As the name implies, a uni-pivot bearing system works on a single bearing which means there are extremely low amounts of friction. However, they are extremely sensitive to touch – even a small touch on the tonearm arm can cause it to rotate.

There are other issues with this design mostly stemming from its extreme sensitivity. Because of this, you won’t find many un-pivot-bearing systems on consumer turntables in today’s turntable era.

For further reading on turntable bearing systems, you can check out this excellent article here.

There are different advantages and disadvantages of each of the arms. One major thing to keep in mind though: the longer the tonearm, the less tracking error. Knowing this, let’s take a deeper look at the various tonearm designs:

Straight arms look exactly as the name implies: straight. They come in both short and long lengths.

Longer-length straight tonearms can be found on many higher-end turntables. Manufacturers such as Pro-Ject use them for some of their flagship turntables like the Pro-Ject Debut Carbon – which uses a carbon-fiber straight type tonearm. Longer straight arms do require anti-skate and also have various bearing systems in place to easily achieve the cartridge balancing act.

As the name implies, an S-shaped tonearm is in the shape of an S. The s-curve in the tonearm allows for the pivot point of the gimbal and the headshell to be in parallel alignment with one another which helps decrease overall friction. The S also allows for more even weight distribution throughout the arm.

Many vintage and modern turntables use the S-shaped arm design because of the advantages above. Additionally, S-shaped arms all use a standard H-4 mount headshell, making fitting cartridges easy.

A J-shaped tonearm is made in the shape of a J… noticing a pattern here? This tonearm design is a little rarer than the two mentioned above. The J arm design moves the mass to one side, so it’s the counterweight’s job to offset this.

The J-type arm is mostly a thing of the past and many vintage turntables did come with them at one point.

Which type of turntable tonearm is best?

While this is a highly subjective question, generally we recommend the S-shaped tonearm because of its highly engineered design, balancing properties, and near-universal cartridge headshell connection.

However, manufacturers like Pro-Ject are doing great things with the straight tonearm. The be thing to consider is the length. Again, a longer tonearm does a better job at reducing vibrations.

What makes a tonearm good?

The sign of a good tonearm is one that is flexible and able to reduce vibrations but also firm as to be able to hold the cartridge in the correct position. Arms come in various shapes and sizes, but typically arms with a longer effective length will be better at reducing vibrations and tracking more fluidly.

Is it possible to replace a tonearm?

Yes, it is possible to replace a tonearm with other arms, however, it can be a challenging endeavor. Turntable manufacturers design their tonearms to work precisely with the systems they’re paired with, so unless you have a direct model replacement, we recommend upgrading the turntable rather than attaching a new arm.

A tonearm can make or break a vinyl listening experience. There are various shapes and sizes out there, and usually once your purchase a turntable you’re stuck with that arm. It’s important to make sure your tonearm is properly balanced and has the correct tracking force, otherwise, you can damage your cartridge and stylus.

With this knowledge, you’re ready to go out and start testing different turntable arms. We hope you found this guide helpful. Thanks for reading!