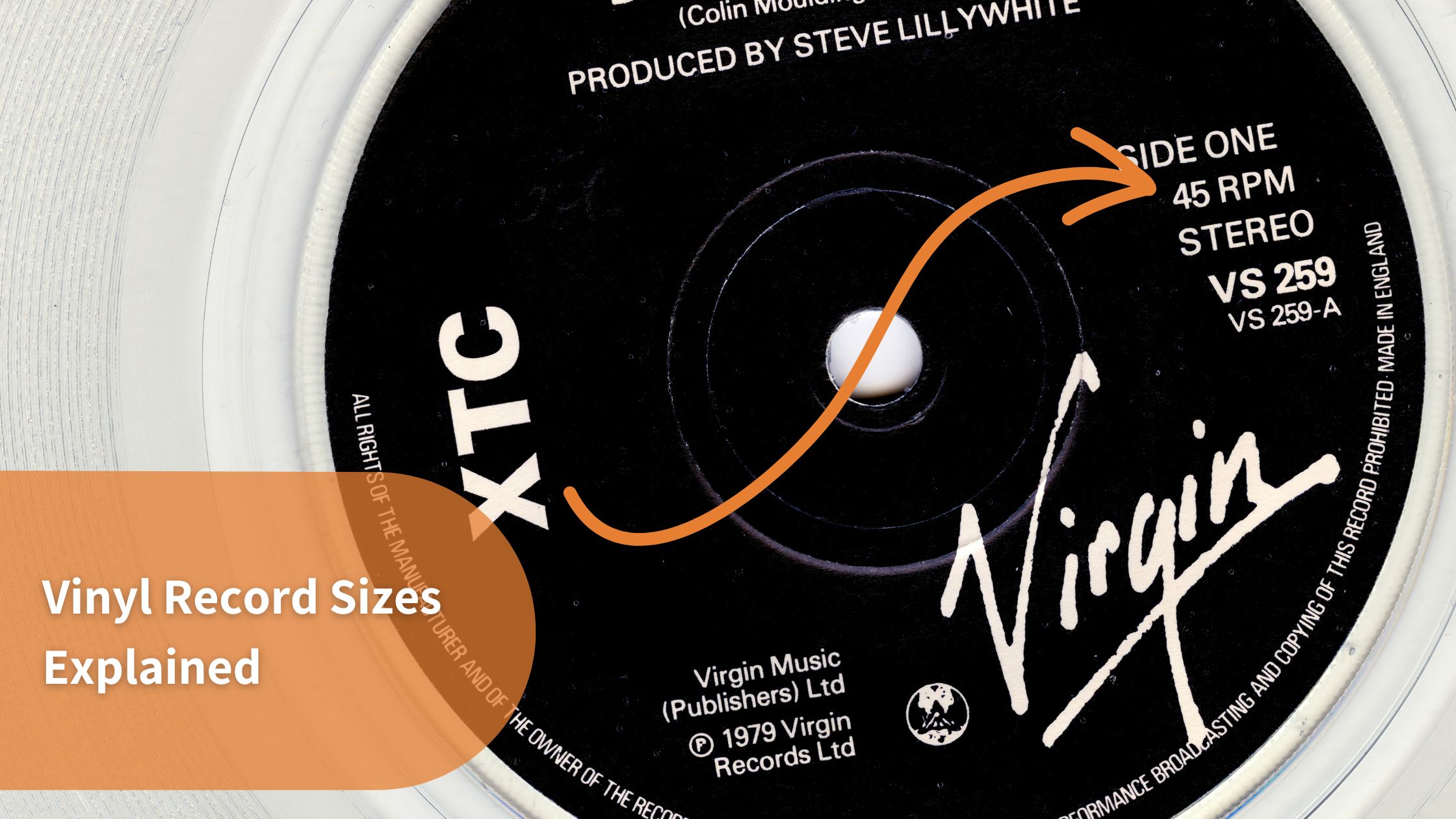 If you’re new to vinyl records, you may think they come in a single size, but they actually come in two main sizes, both of which hold their own unique properties. Most vinyl records are either 12” or 7” wide.

Some turntables can play different record sizes, but you must understand the differences in record sizes so you don’t invest in something that doesn’t suit your needs. This article will dive into everything you need to know about record sizes and what this means for audio playback.

In order for vinyl records to work, numerous parts come into play for a record to generate the audio you love. Turntable needles track the grooves on a vinyl record, and these vibrations create analog sound waves, delivering the classic sound quality record players are known for. The strength of this analog signal can vary depending on how well the needles track the grooves, which is why reliable components play a large part in the overall quality of a turntable.

Every aspect that’s a part of the audio playback must deliver precision and consistency; otherwise, it could lead to a poor listening experience. That being said, you can expect some signal variation during playback, which pertains to the quality of the vinyl grooves.

In an era of digital audio files, most people can discern the difference in audio quality between a record player and a digital streaming platform. Both come with characteristics that people love. Although digital streaming offers plenty of conveniences, record players provide a nostalgic and classic sound quality that can’t be found through any other medium.

Vinyl records are made in three standardized sizes: 7-inch,10-inch, and 12-inch.

Another aspect that makes a vinyl listening experience unique is the different sizes of records and the available speeds. Other types of records are categorized by their revolutions per minute (RPM). This refers to the number of rotations that occur in one minute, and you’ll come across three speeds.

It’s important to check the designated RPM before placing it on your record player, as you may need to adjust your speed switch to match the record’s requirements. If the speed settings of your turntable don’t match the record’s RPM, the audio will sound too fast or slow depending on the RPM.

Overview of vinyl speeds and why they matter

How to identify a record’s speed

You can usually find the designated RPM on the record’s label. This should always be checked before you play a record for the first time, as you want to avoid any potential damage.

Remember that some records can be operated at different RPMs, but the record’s label will have the final say in the RPM that’s supposed to be used.

How record speeds have changed over time

You can thank record companies for the evolution of record speeds. You may be surprised to learn that 78 RPM was the standard in the 1950s. As time passed, vinyl enthusiasts started to understand that faster speeds delivered a lackluster audio quality.

It wasn’t until the development of 33 ⅓ and 45 RPM speeds that this started to change. Record companies started focusing on shifting away from the 10” standard. This also led to an increase in the amount of time that could fit on a vinyl record, as the 12” is capable of twenty-two minutes whereas the 10” could only handle around three minutes. Record labels could now fit a full-length album on a single 12″ vinyl record.

Can record players play all sizes?

While not all record players can play every record size, many modern turntables and record player can. While many turntables are equipped to play records at 33 ⅓ and 45 RPM, only more budget-friendly portable record players tend to have 78 RPM capabilities. Considering 10” 78 RPM records were the standard many decades ago and their 33 and 45 RPM counterparts have much better sound quality, the average user doesn’t have much need to play them on a regular basis.

Most audiophiles aren’t interested in listening to vinyl records at 78 RPM. However, when you consider the unique sound quality and nostalgia that comes with them, some people still seek them out. It’s possible to find modern record players that can play every available record size.

Part of vinyl culture includes a lot of old and new, so many people own a blend of old records that have been around for years with a mix of new vinyl albums. Classic 10” vinyl records tend to have a worse audio quality overall, but there’s an immense amount of character that comes with the sound they provide.

You could also opt for an older record player as they’re known to include some features that aren’t found in modern designs. They aren’t common today, but some vintage record players can switch between 16, 33 ⅓, 45, and 78 RPM. This gives listeners a lot of range to work with, especially regarding the different sizes that have existed over the years.

Audiophiles are generally well-versed in this topic. For those who are just now getting into building a vinyl record collection, understanding the differences between record sizes and RPM speeds is essential to protect their quality and deliver a pristine sound.

Always review the designated RPM information on a record label, and make sure to use a record player compatible with the sizes you have on hand.