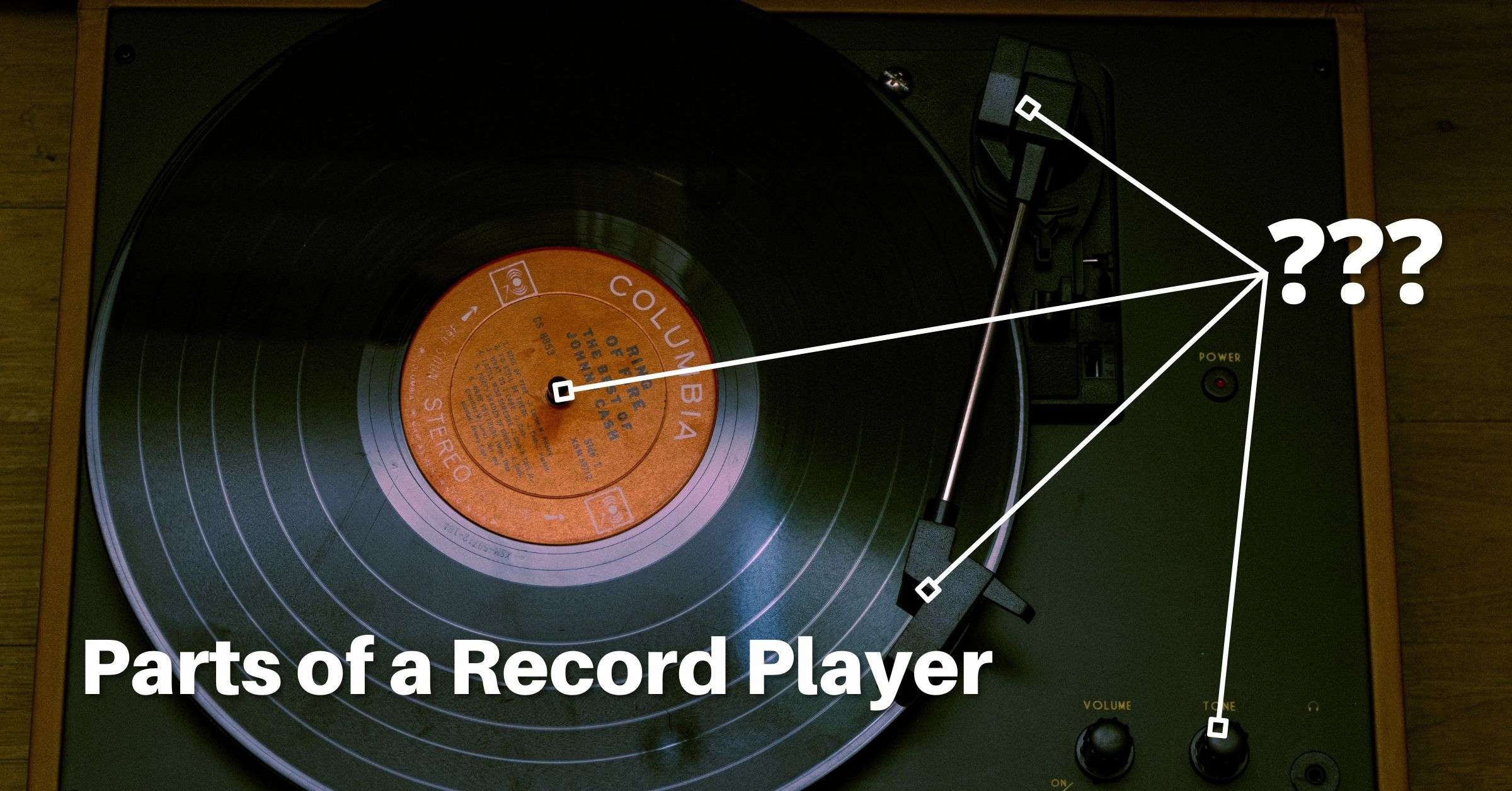 Turntables and record players are incredible engineering accomplishments that fascinate people. It’s hard to be a vinyl-lover and not think about the system that gives you so much joy. In this article, we’ll discuss the main parts of a record player and the functions they serve.

A record player or turntable is an impressive work of engineering. If you’re serious about records, you should have a basic understanding of what each element of your record player accomplishes. Not only will this help you dial in your vinyl setup, but it could save you time and money if a repair is needed down the road.

We suggest all vinyl enthusiasts understand how a record player works and how to maintain their vinyl collection properly. That starts with getting familiar with the anatomy of record players.

Parts of a record player

The turntable is at the center of your record-playing experience. The primary function of the turntable is to spin your records at a steady pace, allowing your stylus/needle to track the record grooves and convert that information into an electrical signal.

The turntable, often known as a “revolving platter,” is made up of two parts:

The turntable drive system refers to the method used to rotate the platter. While there are technically three different drive systems in record players – belt-drive, direct-drive, and idler-wheel – we’re only going to discuss the two main types: belt and direct drive.

A rubber belt is used in a belt drive. This belt is directly connected to the turntable’s motor, allowing quick and precise motions. The player’s platter is mounted on a bearing and is separated from the device’s motor. Since the bearing allows linear and rotational movements, the turntable’s belt drive benefits from the player’s bearing.

Record player owners frequently choose a belt drive that requires adaptability, reliability, and low-effort maintenance due to its fantastic precision. A record player with a belt-drive system is less prone to vibrations. The elastic belt absorbs shock and can help to dampen any harsh vibrations produced by the player’s motor. As a result, it’s an excellent choice for audiophiles.

The direct-drive turntable is equipped with a platter connected directly to the player’s motor. Quick start-up times, slightly more consistent speed, and higher torque are advantages of a direct drive turntable.

Many people utilize them because of their overall dependability and longevity. The reliability of a direct-drive turntable cannot be overstated. You won’t have to worry about belt degradation, and the sound quality will be consistent. The short start-up time is a nice feature for anyone who uses their player frequently, and the robust design ensures an intelligent investment.

It’s also worth noting this is the only drive system DJs use since the motor can be rotated in both directions without the belt causing interference.

The stylus is the needle that rides up and down the record groove in a vinyl record. The stylus (sometimes known as a needle) is a tiny diamond-tipped metal cantilever. Diamonds are the hardest natural material on Earth and are perfect for long-term playing.

The stylus tip can be either spherical or elliptical, and spherical ones are typically less expensive. The spherical cannot “read” the record groove precisely since it sits high on the tracks but will last longer. The elliptical maintains more contact with the grooves and thus captures the sound more precisely. It does, however, wear out far more quickly.

The cartridge is the device that the stylus is connected to. Its purpose is to convert the vibration into an electrical signal that the audio system can amplify. There are two types of cartridges: moving coil (MC) and moving magnet (MM).

Cartridges with a moving magnet have a cantilever that directly transfers vibrations from the groove into the cartridge’s magnet. Its field provides a flow that produces a force to the vibrations. It will then amplify and convert it to a sound.

A moving coil cartridge contains a moving coil and a stationary magnet. This coil produces a force by moving within the magnetic field created by the fixed magnet. Since the moving mass is near the pivot point, inertia is lessened, resulting in a higher-quality sound.

The tonearm is the long arm that supports the phono cartridge. Most tonearms have a headshell or similar connector that allows the tonearm to hold the cartridge as it travels inwards toward the center of the record.

The tonearm’s balance and tracking force are very important. While entry-level record players typically do not have settings for this, many turntables will have a tonearm counterweight and anti-skate setting that will need to be set appropriately.

A high-end turntable may have an S-shaped tonearm as opposed to straight ones. S-shaped arms provide better balance than standard straight tonearms.

The electrical signals from your record player are routed through a phono pre-amp so a stereo system can play them. These preamps take the Phono signal from the cartridge and convert it to line level, which stereos or powered speakers can use.

Before the year 1990, it was expected for an audio receiver to have a phono pre-amplifier, which boosted the audio signals from a record player to the same level as a standard audio transmission, but nowadays, most modern receivers do not as they’re more commonly used with devices like a TV, smartphone, or even CD player which already emits a line level signal.

If your record player doesn’t have a built-in preamp, you’ll need to acquire an external phono preamp to amplify the signal before sending it to a receiver. Check out this article to see if your turntable has a built-in phono preamp.

Dedicated pre-amplifiers are far superior. Internal and freestanding preamps are compared in this article. However, most audiophiles would tell you that using an external preamp is always good because it improves sound quality.

The turntable’s plinth serves as the foundation for the rest of the components. Its primary purpose is to isolate the parts from one another mechanically. Because of this, it’s best if it’s composed of a solid material.

The plinth provides an essential separation purpose as well as an aesthetic one. Most vintage turntables come with a wooden plinth, but they can also be made of various other materials. They keep everything together, and a turntable would be unusable without one, as the electronics usually protrude from the platter’s bottom side.

Of course, a record player can come with other features not described above. Below are some additional features and parts that a higher-end turntable might have:

An anti-skating system is only present on turntables, not record players. As the stylus rides along the groove of a record, anti-skate provides a slight outward push to the tonearm, counteracting the arm’s tendency to slide inwards (skate) toward the center of the record.

Again, it’s worth noting that some turntables and record players may not have this adjustment. On turntables with an integrated cartridge, this is not uncommon. However, this does not rule out that the turntable has this feature; its manufacturer might handle it internally and set it to a fixed value.

Anti-skate is required to achieve appropriate channel balance (equal volume from the left and right channels), reduce distortion, and reduce stylus and record wear. This can be done if the stylus (needle) tip remains centered in the groove while the tonearm moves across it. The stylus will ride one side of the groove without anti-skate, resulting in tracking problems, poor sound quality, and increased record wear.

Pitch control sliders allow you to fine-tune the motor speed of your drive system. If you feel your record is playing too fast or too slow, the pitch slider can address the issue.

It’s critical to realize that the influence of vibration and resonance on your turntable extends far beyond the stylus skipping in the groove. The more effectively you can isolate your record player from all external low-frequency vibrations and resonance, the better it will sound. The turntable’s isolation feet are crucial, especially for those who don’t want to deal with expensive audiophile racks, platforms, and other accessories.

An excellent isolation foot will usually have a spring and damping substance. This type of foot is good at absorbing resonance from beneath the turntable. The classic conical foot, sometimes known as spike feet, is another tried and reliable option. These reduce the amount of contact area between your record player and the surface it rests on to reduce vibration and resonance from traveling upward.

Several permutations of these designs and other more “advanced” alternatives are available. For better sound, try increasing your isolation. You’ll notice it in your playback’s clarity, spatial awareness, and low-level detail.

Naturally, there are variations in techniques, features, and materials from one record player to another. The primary elements of a record player are fundamentally founded on the same basic concepts that have existed for over a century.

There is a wide range of record players to choose from on the market. It’s a good idea to keep in mind a few pointers, such as remembering that changing the speed record is dependent on the size of the record you’re playing, avoiding scratching it, and keeping your vinyl clean for better sound quality.

Vinyl records might seem old school by today’s digital standards, but that doesn’t imply they’re obsolete. It’s simple to see how vinyl records will stand the test of time, given their continuing comeback and appeal among people of all ages. Engineers are constantly improving on timeless concepts and solid foundations.

The story of vinyl records and turntables isn’t over just yet.