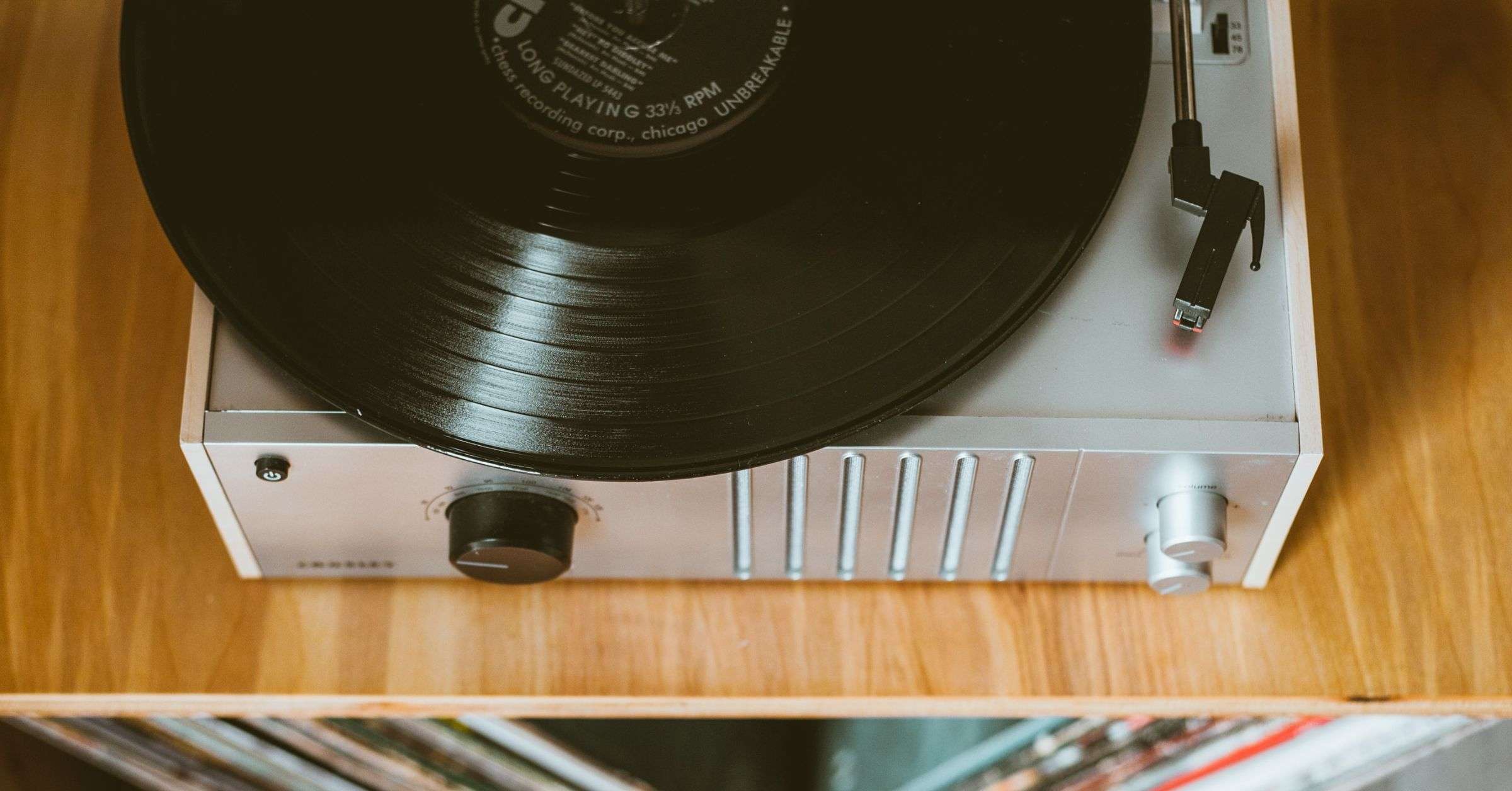 In recent years, vinyl has made a resurgence into the mainstream – and for a good reason. The natural, high-fidelity sound of a record tremendously improves the listening experience for many music lovers. It’s easy to get caught up in the music, but have you ever stopped to think “how does a record player work?”

This article details the science and history behind record players and vinyl records. Let’s begin!

How does a record player work?

A record player has a component called a stylus. The stylus rides along the grooves of a record at a specific speed. The stylus picks up small sound vibrations that are passed up to a cartridge. The vibrations are then converted into electrical signals and output through speakers as sound.

The main parts of a record player

Every record player or turntable consists of the same essential elements to produce sound waves from a vinyl record. The main parts of a record player consist of the needle, cartridge, and tonearm.

Each component serves a particular job and is vital to turning the grooves of a record into listenable music. Let’s outline the essential components:

A needle, also referred to as a stylus, is made out of a hard, natural material – often diamond or sapphire. The needle is cone-shaped and connected to the cartridge with a thin piece of metal called a cantilever.

The needle is the one that is in contact with the record and transmits the vibrations into the cartridge. The needle “reads” the patterns or grooves in the record so they can be converted into music everybody is familiar with.

This component has a coil that gets hit with vibration inside a magnetic field in the vinyl. These vibrations are converted to a weak electrical signal and passed up the tonearm to a pre-amplifier called a phono stage.

The tonearm allows the stylus and cartridge to stay afloat. It can be curved, straight, and S-shaped in variations, and all have a different sound quality effect on the record and feel.

Tonearms sometimes have counterweights attached to the back to set the tracking force, which is the amount of pressure applied to the record itself.

The turntable serves an essential function of a record player. This is the device that rotates vinyl records at a consistent speed. These speeds are usually 33 1/3, 45, and sometimes 78 revolutions per minute. Most standard 12-inch vinyl records play at 33 1/3 RPM.

The turntable in a record player is powered by one of two primary drive systems: belt drive or direct drive. Both belt drive and direct drive turntables have their own unique pros and cons, so it’s worth researching which system fits your needs best.

How a record player works – a full walkthrough

Now that you know the basic components of a record player, let’s get a little deeper. Here’s a step-by-step guide on how record players work:

After placing a record on the record player platter and hitting play, the turntable begins to spin. Turntables are calibrated to keep a record spinning at a consistent speed. The size of the record will dictate what speed it plays at, but the standard is usually 33 1/3 RPM (revolutions per minute) for 12-inch LPs.

Some record players have a pitch adjustment used to fine-tune the player to the correct speed.

2: The stylus moves across the record grooves

As the record player spins, the stylus is lowered onto the record and begins to “read” the sound information within the grooves of the record. The stylus moves up and down to translate the physical information into vibrations.

4: The electrical signal is amplified

After the mechanical energy is converted into an electrical signal by the cartridge, it is what’s called a Phono signal. A phono signal is a very quiet signal and needs amplification in order to be converted into a line signal, which is the audio signal that can be projected by a speaker system.

Many record players will have a built-in phono preamp that completes this job, both an external preamp can be purchased as well to fulfill this function.

Once the signal is amplified, it’s ready to be passed along to a stereo system to be played through speakers.

What are vinyl records made of?

Vinyl records are created with a particular blend of substances with critical functions. For a record to produce sound waves, are record must consist of these things:

How is a vinyl record made?

Vinyl records are made using a process called lacquer cutting. First, a master disc is created. This disc is then used to create a negative mold, which makes the positive vinyl pressing.

The master disc is created by engraving the recorded sound waves into a thin layer of metal. The depth of the engraving will determine the loudness and frequency response of the record. This process is achieved using a lathe, which cuts grooves into the metal surface.

The master disc is then shipped off to be used in creating a negative mold. This mold is created by spinning the metal disc against a pliable material called “powdered rosin” at high speeds.

This process, known as electroforming, creates an impression of the audio signal in the rosin layer. Next, another metal disc is added to this indentation and put into an acid bath. After several hours, what remains will be a negative mold of the audio signal on aluminum or copper.

History of the record player: Starting at the phonograph

Now that we know the essential parts of a record player and what function they serve, let’s go into the history and evolution of record players – starting with the phonograph.

Record players were first invented in 1877 by Thomas Edison. It was then called a phonograph and used a tinfoil and cardboard cylinder as the main components to record sound waves.

A few years later, the graphophone was invented at the Volta Laboratory – a lab created by Alexander Graham Bell. Emile Berliner patented the invention in 1887 and used shellac and hard rubber. Experts, historians, and engineers alike have noted that his design was the basis for today’s record player.

Let’s take a brief look to appreciate the history of music listening as well as the rise and fall (and rise again) of various listening mediums.

The resurgence of vinyl record players

Despite the widespread use of music streaming services in today’s society, vinyl has seen a massive comeback that no one could have predicted. LP vinyl record sales jumped by over 50% in 2021, becoming the most preferred medium for purchasing music – aside from streaming (source) – surpassing the sales of both compact discs and digital albums.

In 2021 alone, 41.7 million vinyl LPs were sold. It’s obvious that music listeners seem to prefer to own physical copies of their favorite albums. Pair this with the high-quality playback sound and nostalgia of record players and you have the recipe for success.

It’s fascinating to see how a record player works and has evolved throughout the years – starting from a tinfoil cylinder to the sleek modern record players we see today. And with its recent resurgence in popularity, who knows what the future holds for this classic listening experience!