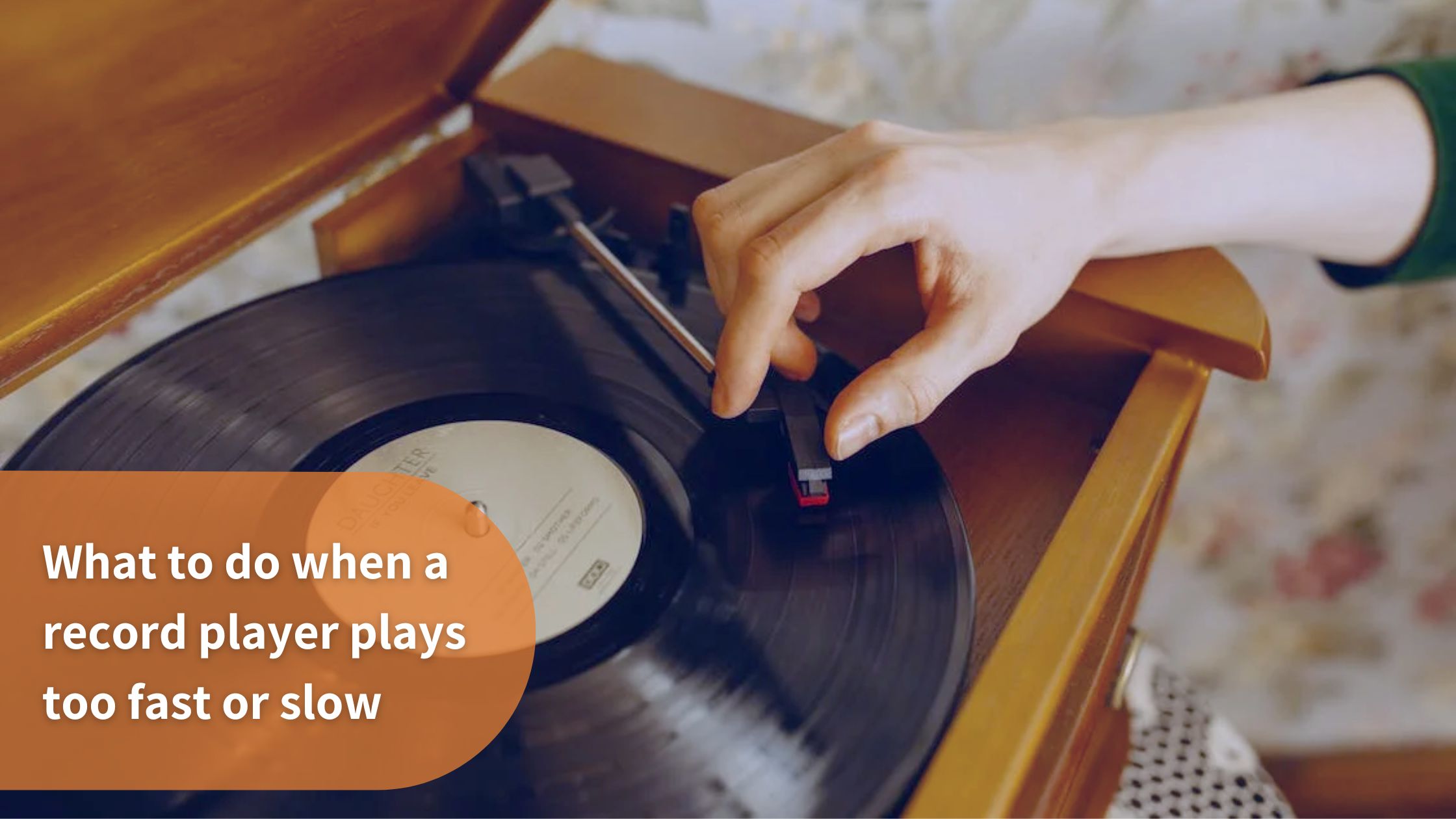 At some point, everyone’s experienced their record player playing too fast or slow. This can be really frustrating, but thankfully there are some simple ways to fix it! In this article, we’ll outline what to do if your record player is playing at the wrong speed. So whether you’re a vinyl newbie or an old pro, read on for tips on how to correct this issue.

Before tinkering with anything, you want to be sure that your turntable or record player actually has a speed issue. I recommend using an application on your smartphone like RPM – The Turntable Accuracy Checker in order to measure the platter’s speed.

These apps do a great job of measuring noticeable speed issues for any turntable or record player. If after your testing you find there to be a speed issue, move on to the next steps below.

A record player playing too fast could be caused by quite a few factors and can vary based on the type of equipment you own. Most of these issues can be fixed on your own with the right information, but you’ll want to go through the process of eliminating each issue one by one.

A speed issue on your record player could be due to the following:

One of the easiest issues to diagnose is to check if the record player speed selector is set to the correct speed for the record you’re playing. Most records play at either 33 ⅓ or 45 RPM depending on their size. If the record player’s speed switch isn’t properly set, the music is going to sound too fast or slow.

To fix this, simply check the other turntable speed setting you have available as well as take a look at the record’s label which should indicate the proper RPM.

Even something as minuscule as an uneven center hole on a vinyl record can cause issues with speed and performance. If this is an issue, the record won’t rest properly on the platter, and playback won’t sound how it should, as the record will wobble, causing tracking issues as well.

You may only notice a slight change in speed with an uneven center hole, but for audiophiles, this change in performance will sound clear as day. Depending on the severity of the damage on the center hole of the record, this can’t always be fixed. This is primarily found with older and unkept records and shows why taking care of your vinyl collection and record player is essential.

The spindle hole of the record may need to be filed down to return to a more even shape. In the past, I’ve done this with a pocket knife, but any semi-sharp object that fits within the hole will do.

Be very careful not to shave off too much of the hole at once, only doing one or two scrapes before testing the record on the spindle again.

Keeping turntables clean inside and out may take a little work, but it’s essential to maintaining their quality and functionality. It may seem pretty minor, but dust and debris can have an adverse effect on the motor speed. Not only will too much friction affect the turntable speed of moving components, but it can also cause irreversible damage if left unchecked.

It’s known that this is more of an issue with belt-driven turntables. Still, the problem can also occur with the direct-drive variety.

If your turntable or record player is in need of a cleaning, there’s no time like the present to get this job done!

Starting with debris, there are a few ways you can approach this common issue. You can either take components apart and clean them individually or use a can of compressed air and/or electrical contact cleaner.

However, you want to be careful with compressed air as it can be pretty forceful, but spraying from a distance will ensure no additional damage is caused. Below are a few steps you can follow that’ll help avoid any unintentional damage.

This is a typical issue that’ll need adjustment every so often. Most turntables will need to be calibrated every so often. Additionally, a direct drive player may also have a separate adjustment for pitch, which is a very slight adjustment to the record’s speed.

When calibrating a turntable, it shouldn’t take too much adjustment. In most cases, turntables include adjustment screws or dials that allow you to make easy calibrations when needed.

You’ll find adjustment screws for both 33 and 45 rpm speeds, but if you notice your turntable is playing at the wrong speed after the fact, you may want to have a repair shop look at it. Adjustment screws can be somewhat fragile, so it’s a good idea to use minimal force.

Here is where we’d recommend using a turntable RPM accuracy app like the one linked above. Alternatively, if your turntable has a pitch calibration light, you can use that instead and follow this guide.

Keep in mind, it’s more common for users to forget to switch to the correct speed when swapping out records. Before tinkering with internal components, check to ensure your speed switch is positioned correctly.

Considering the mechanical nature of turntables, all of the moving parts must have the lubrication they need to function correctly. There are a variety of lubricants and oils that you can use to fix dry parts in a record player. You should only use a small amount as the components won’t need much to operate as they should.

I recommend looking for oil specifically for turntables, but if you can’t find that, oil for clocks, guns, and other mechanical applications will work (note: NOT cars). Dry parts can easily affect the motor speed and a range of other minor parts, and you want to be sure which components need lubrication and which don’t.

After repeated use, it’s common for specific components to need a little lubrication to minimize friction and uphold fluid functionality. I recommend oiling your turntable motor, especially direct drive motors, every year.

You will want to locate where your turntable motor pulley exists. Note, this may require you to disassemble part of the turntable. Once the motor pulley is found, place a small amount of oil in it and give the turntable platter a few rotations using your hand while the device is turned off.

Belt-driven turntables are relatively sensitive when it comes to tension and belt elasticity. It’s normal for a turntable belt to wear and stretch as time goes on, but it can cause issues with the correct speed of a record player.

It doesn’t take much adjustment for you to notice a difference in performance. Even the slightest change in the belt’s structure will inherently cause a turntable to operate at the wrong speed. This stretching and tension will also affect the belt’s connection with the pulley.

When it comes to diagnosing this issue, it will take a little bit more involvement than the items above, especially if your turntable belt exists internally vs externally. If it feels loose in any way, it’s probably time to get a new belt.

Issues with belt tension will require an inspection and potentially a replacement. Although an inspection isn’t too tricky, as belts are pretty easy to remove, a repair shop might be handy when if you don’t feel confident in replacing this component yourself.

Luckily, there are plenty of guides on YouTube available. Belts themselves are not all that expensive – maybe $10-20 – but an audio repair shop will also charge for labor. That’s why I’d recommend at least trying to replace a belt before taking it into a shop.

Thankfully, many issues with record players that affect their speed are relatively easy to fix. At times, it does require a little know-how to perform a proper fix, and it never hurts to take your record player to a repair shop if you aren’t sure.

Follow the guidance in this article, and you’ll be able to fix most speed issues at home by yourself. If at any point you’re worried about causing any damage to your turntable, it’s always advantageous to seek professional help before potentially making things worse.