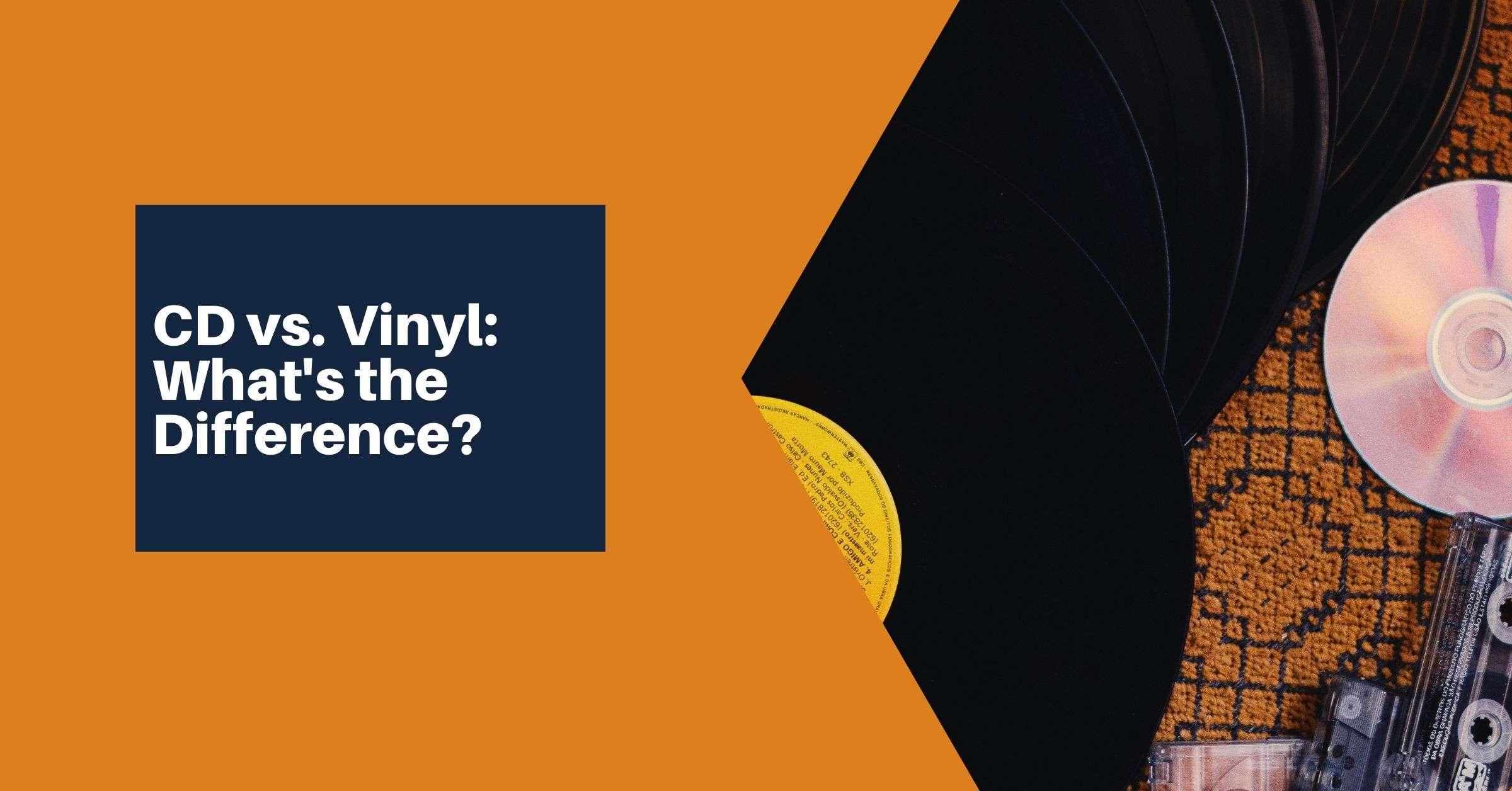 As technology has evolved over time, the way music is created, distributed, received, and enjoyed has gone through many changes. In today’s world, vinyl has been getting a lot of attention as many people enjoy the vintage and nostalgic sound that they provide.

CDs take the cake if you want to look at efficiency, adaptability, and portability. Regardless of personal preference, there are a few critical differences between CDs and vinyl records that can’t be argued, and this article will provide all of the insight you’ll need to understand the differences between their unique characteristics.

Of course, that’s not the only thing different about CDs and vinyl. Let’s take a deeper look at what sets these two pieces of media apart.

What are the main differences between a CD and a vinyl record?

First and foremost, one of the primary differences between a CD and vinyl record is how the music is placed and how it’s read. With CDs, music is digitally encoded onto the CD itself, which allows the modern laser technology in CD players to read and play the digital music that’s stored on the disc. Regarding efficiency and portability, CDs (compact discs) are the best choice as you can play them on a portable CD player or speaker system with a CD insert.

When you take a look at vinyl records, they aren’t nearly as efficient or portable. Still, they provide a listening experience that can’t be recreated by the digital recording CDs offer. A vinyl recording works off of analog sound storage that can be read by the fine needle of a record player. These records are a disc made out of polyvinyl chloride that also consists of an inscribed spiral groove that allows the needle to read and play the music effortlessly.

Considered the rawest audio recording method, analog consists of the recording of natural elements to turn them into electrical analog signals, which are then imprinted directly into a magnetic tape, or on a vinyl record with their signature grooves. Analog audio is well-loved by many as it generally offers a clean, live, organic sound that many music enthusiasts crave. From another perspective, vinyl records have trouble displaying lower frequencies.

When you look at digital audio, it’s created in a similar way to analog, but it comes with a few extra steps. Digital recordings take an analog signal and process it further to turn it into a digital signal that can be read by computers and software alike.

For example, modern music production is done with computers as the audio is recorded into DAWs (digital audio workstations) that are more than equipped to process analog and digital audio signals.

These digital files can be read through many different mediums such as CDs, MP3 players, digital streaming, and more, whereas vinyl records require a record player to be played at all. This fact takes us to the next point: the differences in audio quality between analog and digital recording playback.

Sound quality can be pretty subjective based on preference, but if you want to look at the facts, both CDs and vinyl have their benefits, but their audio quality is hardly comparable.

Although your ear may not pick out these differences, CDs aren’t capturing the entire sound wave from the analog signal as they’re 16-bit, which inherently lowers the quality of the original recording.

To help simplify this point, CD audio is distorted as their sample rate can’t keep up with all of the organic elements from the original recording. This doesn’t mean digital files sound terrible by any means, as their adaptability with modern sound systems offers a great experience. Although, from an audiophile’s perspective, digital files won’t ever amount to the experience vinyl records offer which is why they tend to prefer vinyl.

With vinyl recordings, each groove etched into the record is a replica of the soundwaves created from the analog recording. Since the grooves are essentially a mirror of those soundwaves, vinyl is able to retain all of the information from the original sound.

This way, you won’t miss any of the unique sonics and instrumentation that goes into the production. Moreover, considering that record players output analog audio, you can still route them through a speaker system without converting the audio itself.

What are the pros and cons?

Regarding the pros and cons that come with CD-quality audio and the vintage sound that vinyl provides, both come with characteristics that music lovers prefer. Some of these differences are undeniable, while others come down to your preference between digital music and analog audio. Below I’ve listed some of the essential pros and cons to consider between the two:

Why are vinyl records more expensive than CDs?

Simply put, the process of creating vinyl records is much more extensive and taxing than CDs. There are other factors that have an effect on this too, such as supply and demand.

In recent years, vinyl records have become increasingly popular with younger generations due to the organic sound quality and the collectible nature of the community. Not to mention that there aren’t nearly as many vinyl pressing plants as there are CD manufacturers. When you only have a few pressing plants and thousands of people buying vinyl records, the cost is bound to go up.

With a compact disc, it’s a much faster “copy and paste” manufacturing process, and when you have what seems like an endless number of CD manufacturers, it isn’t difficult to shell out tens of thousands of them at a time. Each vinyl LP has to have every individual groove printed, which also comes with its fair share of manual labor.

Each vinyl record goes through a multi-step process that’s much more time-consuming than creating CDs. From manufacturing the master disc, cutting the disc, all the way to creating the stamper, to pressing the record, each vinyl disc has to go through these steps before it’s completed.

Whereas creating CDs is a much more automated process. When the first CD of an audio recording is made, you can easily copy it without needing as much manual labor as vinyl record production requires.

Considering that each CD doesn’t require the same tedious process that vinyl comes with, it allows manufacturers to streamline production and produce as many CDs as they need. You also have to keep in mind that materials for CDs are much cheaper than the materials required for vinyl records.

Overall, some of these cost factors are solidified no matter what, but others have a lot to do with the current supply and demand of music lovers all over the world.

We’re in a unique time with a vinyl resurgence, yet there aren’t nearly enough manufacturers to keep up with the demand, which causes new vinyl records to cost quite a bit more than new CDs. Aside from economic factors, some vinyl records hold a significant value as many come from a bygone era in music, and there are simply some vinyl records you can’t find at all anymore. This makes them more of a commodity than CDs, as you can find copies of CDs almost anywhere.

CDs and vinyl records come with their own unique qualities, pros, and cons that vary for each music enthusiast. The way audio is consumed will continue to evolve, but the specific attributes that vinyl provides are undeniable.

In the same breath, the efficiency and portability CDs provide make them highly sought after as you can take them with you anywhere. Digital audio will always be the more efficient and adaptable form of audio. Nevertheless, a vinyl collection offers a level of accuracy that digital recording formats simply won’t be able to replicate.

Lucas is the Senior Reviews Editor at HiFi Hippo covering a range of topics relating to turntables, preamps, speakers, and everything vinyl. With 15+ years of music experience, Lucas uses his unbiased ear to guide readers in the right direction for all their viny land home audio needs.